“Do you eat apples of the Earth?”, “You should wear a knot butterfly at the wedding”, “My grandma’s house has two beautiful ox’s eyes”, “I have an irrational fear of bald-mice.” are all perfectly understandable sentences for someone who speaks French. Translated into English, however, the wording sounds a little bit funny.

When learning a language, we often come across words that, translated into our own language, seem bizarre, stupid or funny. In fact, those are the words that I find the most interesting and the most memorable. Take the English word “dragonfly” for instance. Sure, it has nothing to do with a flying dragon like I imagined them (do you also picture the ones from Game of Thrones?) but it’s so unexpected that it’s actually pretty easy to remember it. In German, the word for plane is also pretty funny: “das Flugzeug” literally translates, in my mind, as the “flight stuff”. Yes, it might not make sense to someone else, but to me it’s a perfect mnemonic way to learn vocabulary.

Thankfully for you – or unfortunately, your call – the French language has some wonderful funny words of its own. Don’t forget: it may not make sense to you but it does for French speaking people.

This may be the most common and strange compound word of the French language. Literally, it translates as “apple from Earth” or “apple of the Earth”, it actually means a mere potato. Weird, when we know that a potato is not a fruit but a root… And to confuse things even more, you’ll often hear French speakers call a “pomme de terre” a “patate” in colloquial French.

“Le noeud pap”, as the French would say, is a very fancy piece of clothing usually worn only on special occasions like weddings or balls. It seems that a knot butterfly, as the literal translation suggests, is for French people’s mind a very accurate description of a bow tie… Why not?

What is the difference between a mouse and a bat in French? Apparently one of them is bald! Formed with the words “chauve” (bald) and “souris” (mouse), the French word for bat doesn’t seem to make much sense. Originally, it may have come from “chouette-souris” (owl-mouse) because they are nocturnal animals but was transformed into “chauve-souris”, which is a lot funnier indeed.

Ok, this one isn’t as popular as the others but its name is definitely as interesting. Even if we know the words “chèvre” (goat) and “feuille” (leaf), this still doesn’t help guess that “chèvrefeuille” is nothing but “honeysuckle” in English. To confuse things even more, according to the legend, the sprouts of this aromatic plant were eaten by roe deers, called “chevreuil” in French. Anyway, it’s still has nothing to do with goats…

You would probably call me crazy if I was telling you that we can see a lot of “flying deers” on the beaches in France, particularly in the city of Berck, in the north of France. Would it make more sense if I told you that this is what we call kites in French? Originally, the word “cerf” (deer) was badly translated from the word “sèrp” (meaning “snakes”). Therefore, we shouldn’t call them “flying deers” but “flying snakes” (serpent-volant). But that would be weird, right?

An ox’s eye can be three things in French: the literal eye of an ox, a peephole or a very cute and practical window in a building. In the shape of an oval, the bull’s eye (as they are also called in English), is a small window located in the upper part of a building, or in the attic, to let the light in and ventilate a place. Now, if someone’s talking about “un oeil de boeuf”, they are most likely talking architecture rather than anatomy.

A bowl full of it is quite a good image to express what this word figuratively means in French. If it happens to you it means you’ve had enough of what was pouring into the bowl. Listen carefully to French speakers and you’ll surely hear a lot of them say “j’en ai ras-le-bol !” when talking about their work, their children or life. That sounds depressing? Well… After all if you’ve had your bowl full it’s because you’ve had too much of something, you’re fed up and a bit depressed by your surroundings and your situation.

If you ever studied French, you surely have realised by now that the French language is full of funny words, to use but also to pronounce, and that unlike in English or in German, it is nearly impossible to make up a word because there’s probably one that already exists!

How many times have you come across a French word that was untranslatable in your own language? Hopefully, not many. Yet, it might happen more than you’d expect. Yes, the French language may be beautiful to hear, romantic and sexy but did you know it could also be funny and help you express feelings you didn’t know you had? Here’s a non-exhaustive list of French funny words that (maybe) don’t even exist in your language!

This is surely what happens to anyone going to a foreign land for the first time: it’s unfamiliar. This adjective comes from the word “pays” (country) and the prefix “dé” which shows a negation. Imagine going in a different country where you have no landmarks or points of reference, whether it’s the climate, the landscape, the language or your habits. If you feel lost and disoriented by your surroundings, but in a positive way, or if you are just in a place where your daily life is a long gone memory, this is probably the right time to use this sentence: “c’est dépaysant !”

When it comes to food, there are obviously many French dishes that come to mind. But have you ever heard of the “tartine”? It’s not really a dish per se but it’s quite popular as breakfast, lunch, goûter and apéritif among French people. Take a piece of fresh bread, nicely sliced, add butter or chocolate spread or ham or cheese or even hummus or guacamole on it and bam!, you’ve got yourself a “tartine”! Tartine de pain beurrée (buttered tartine) dipped in hot cocoa is a most favourite at breakfast.

If you like lazy Sundays or if you just love walking aimlessly, just for the pleasure of walking, this verb may come as very handy for you. And, if you do this often, you can surely call yourself a “flâneur” or “flâneuse”.

This funny sounding word isn’t particularly positive. Used mostly in a familiar context, it describes the feeling of being tired, unmotivated, deplete and depressed all at the same time. Let’s hope you won’t come to that by the end of this article! If it’s not a good description for yourself, you can also use it to describe something that is deflated.

Doing small repairs at home is one of the most popular past-times among the French people. But before you imagine the whole nation being quite handy, know that “bricoler” isn’t very demanding and doesn’t require special training. Every one loves it because every one can do it. It’s a mix between DIY projects (like building a bench for your garden), small repairs (like changing a lightbulb or fixing a door handle) and home improvements (like painting the bedroom). Yes, we can!

If you keep saying nonsense or if you are off your head, a French person could say: “tu es déjanté !”. Well, maybe not the young people… Fun fact: “la jante” is actually the rim of a car’s wheel. Now, why would taking the rim off your car would ever be associated to saying nonsense? This will remain a mystery of the French language.

It doesn’t help to understand this one to notice the word “coeur” (heart) in there. Funnily, when the French people talk about nausea they often refer to the word “coeur”. Take for instance “le mal de coeur” (heart pain) which stands for motion sickness, and which is completely unrelated to our vital organ. In France, when a situation or a food is “écoeurant” it means it’s nauseating or sickening. It repulses the person. But, be careful, in Canada and Québec particularly, “écoeurant” is a very positive word that means “it’s good” or “it’s awesome”.

Kids would certainly be told by their parents not to over use this word outside the house. “Vachement” isn’t very formal or polite but it is certainly massively used in France as a synonym of “a lot”: il y a vachement de monde ici = there’s tons of people here. Oh, and yes, it comes from the word “vache” (cow).

If you also like “le bricolage” like many French people do, this type of store may come in handy for you. Before we could find everything in a supermarket, French people would go to a “quincaillerie” (pronounce k-ain-kah-yuh-ree), a smaller store where one could find literally everything: tools, toys, kitchen utensils, sports equipment, garden accessories…

We don’t know what cardboard boxes (carton) have to do with it but “cartonner” or “faire un carton” describes a big success. Apparently, it would come from the cardboard targets in the shooting stalls of the fairs. If you hit them all, you are indeed very successful or very good at what you’re doing.

Here’s a word that is used in many languages. “Voilà” can either conclude a story, introduce a person or thing, attract people’s attention to an event or indicate an explanation. Et voilà!

Finally, if you want to master more colloquial French, watch this video to get familiar with ‘Verlan’, French slang. If you don’t end up brain-fried by this nonsense of shredded mixed syllables, you will be young and hip forever.

We hope you’ve enjoyed our collection of funny French words. If you’re interested in pursuing your knowledge of funny words in other languages, see what you think of these funny German words or funny Spanish expressions. Or if you’re up for a challenge, head to our YouTube channel to try and learn some Spanish, German or French slang! 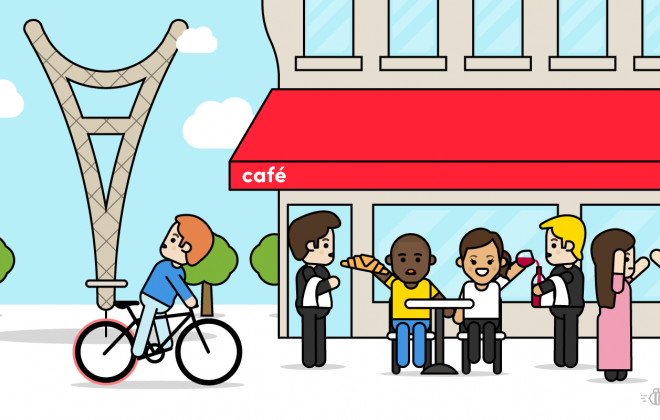